“Let’s both sketch for about 15 minutes, you work on some circular ideas, while I work on some linear ones”: one example of collaboration. Today’s class was focused on developing a preliminary logo for MaSC, a music program here at NYUAD, however, outside of getting some more practice with Adobe Illustrator, the session taught me some interesting things about collaboration and its importance in design.

The class was oriented around a few rules: 1) only two question sessions, 2) work in groups of two to three (I was working with the incredibly talented Shenuka), and 3) “design a logo in 2 hours”, which, in most cases, is an impossible task. In this experience, however, I found that our ability to communicate with and learn from one another was integral to our ability to produce a decent logo.

In learning about logo’s requirements, we learned an important distinction: embodying the essence of clients versus creating identities for them. Upon first thought of music, come music notes, scores, records and other typical icons, and my immediate impulse is to use such an icon to “represent” music/sound. However, Goffredo brings up an important point, Apple, a technology company, centers its identity around an apple, a fruit. By this logic, the store should be a minimalist fruit stand with interactive displays that allow you to take “test bites” out of your desired snack, or dessert (whichever one you prefer). The apple does not necessarily embody anything about the company’s goals, aspirations, projects or clientele, rather it is an association that Rob Janoff forged between the logo and the company. It has now come to represent the pinnacle of capitalism, our obsession with technology, and “innovation”, but ultimately is not inherently represented by a half-eaten fruit. I learn that the logo designer is responsible for forging the relationship between icon and purpose. However, this does not imply a lack of meaning, although fruits have no inherent connection to technology, the meaning created over time by the Apple logo is as valuable as a hypothetical logo based off a circuit-board.

Operating under this concept of association, Shenuka and I found ourselves looking for subtle connections to sound and MaSC’s programs, avoiding explicit iconographic representations. When inquired about the program’s goals and projects, we were told of projects near the ocean, pearl diving, intercultural dialogue and of course, music and sound. Here, Shenuka develops a brilliant conceptual focus, morse code as a representation of rhythm, a feature central to both music and MaSC’s programs. She went on to find the morse equivalent of M-A-S-C. Aligning closely with this earlier concept of iconographical disassociation, we did not want to represent morse code, rhythm or music, rather use them as visual inspiration. This initial process of inquiry in creating a conceptual direction was the first form of collaboration. Then we began sketching. 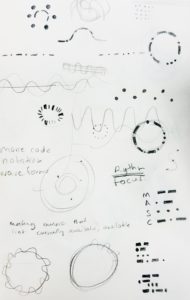 Shenuka had some interesting circular designs that used the line and dot nature of morse on the left. 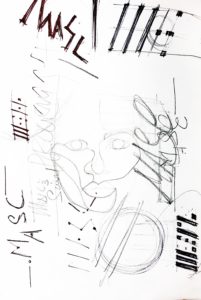 I spent some time sketching square and more linear ideas on the right. Here lies another point of collaboration, when we visually communicate with one another. We continued to sketch, merging our ideas together and removing aspects of our own. We learned from one another. After 15-20 minutes of sketching and manipulating out ideas on paper, we decided to use the small verticle design on the bottom right of the page (right). 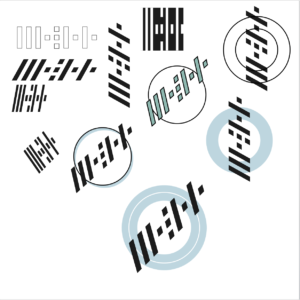 We then move to the big screen to finalize our design. Collaboration at this stage changed. As I had slightly more experience with Illustrator’s tools, I took lead on using the software, but Shenuka’s engagement was far from over. From blocking out big shapes to finding creative solutions to issues in building forms on the screen, Shenuka was active. We scaled, shrunk, stretched compressed, merged, and removed shapes until we came to an agreement on our final proposal. Below is what we decided on as a preliminary idea, and we are open to editing the design further, maybe adding some text. 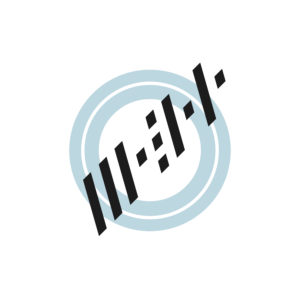 However, my experience with collaboration did not end here, as I found other students creating designs that I would have never imagined myself. William and Kyle’s conch shell concept was incredibly unique and I find it a beautiful way of representing the MaSC program. Prior to this class, my idea of collaboration was limited to brainstorming or moral support. Little did I realize how diverse collaboration can be in design, and how important it is. If teams of two to three can create interesting and unique concepts in two hours, I can only imagine what we can produce with more time and further collaboration.