Panels in within a comic book are each “units of time, you see them simultaneously. So you have various moments in time presented simultaneously”. This is a line from an interview with Art Spiegelman, comic book artist, and cartoonist referenced by one of my favorite YouTubers, Nerdwriter. The video “How to Design a Comic Book Page” is one of my favorites in Nerdwriter’s video essay series and builds an argument on how graphic design thinking becomes an integral part of constructing narratives. I highly recommend the video, but the following post is hardly a just review of his and Spiegelman’s ideas.

One idea underlies my thinking here: What is the unit of the design? For Spiegelman the page behaves as such. The audience engages with the page, as a whole, in order to engage with the narrative.

I’ve learned a few things under this idea: For one, comics, generally conceived as purely narratives, can be overlooked for their graphic design excellence. It is integral to its function, central even within panels: small windows to a world that is selectively built for our experience. One example of this is Marjane Satrapi’s Persepolis, a gorgeous and emotional graphic novel of Satrapi’s coming of age within Iran during the Islamic Revolution. 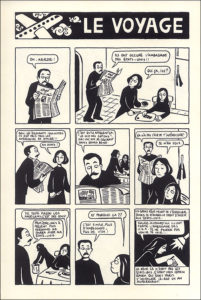 In its simplest sense, the design of the panels corresponds to the novel’s narrative structure. The first panels present to us tiles, a table, and fridge describing the location of the interaction that will come. But as we continue reading, the details of the environment disappear, providing precedence to Satrapi’s dialogue with her parents.

Additionally, aligning with Spiegelman’s idea, the page as a unit of narration, at a glance, shows us a visual shift in the story. Glance at the page. Glance at the larger unit of design. We see the plain, white background behind Satrapi’s father reading the newspaper in the first panel. In the last, a similar relationship between foreground and background, but a black backdrop with a young Satrapi at her desk; something had happened. Here, we witness the selective world building which is a design choice made by Satrapi that works in tandem with the narrative structure. 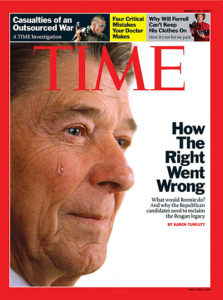 The heavy gaze of Ronald Raegen, his tear, the guiding phrase “How the Right Went Wrong”; the cover of this edition. The narrative of a political disaster in the US, the role of Reagen policy and its consequences, all captured on the cover page. But the role of the narrative extends further, as three panels lie above, with similarly themed stories: one about war, another about one’s relationship with healthcare, the last, an almost ridicule of Will Ferrell and his personality and acting. Here lies a narrative theme: mistakes, things that go wrong, that should be different from what they are, all placed carefully on the page, constructing the narrative of failure. As a unit of design, the page presents us simultaneous examples of the theme and its interrelations. This impact is one rooted in graphic design, but also is a design complimented by the thematic content of this edition, an interdisciplinary cooperation.

This centrality of graphic design in comic books and publications echoes a reoccurring idea of the diversity and almost invasive nature of graphic design in our world. We need graphic design. But the two examples present an important idea about our unit. What should be seen at a glance? In a comic book, the panel or page, on the inside of a building, the wall or the room? As we design, we have control over how information is received and engaged with by the spectator.