Politics, policy, and social organization are not mutually exclusive to graphic design and other forms of design, they are in fact an integral part of how we operate in our world. This idea is constantly affirmed in our class, but an exhibition of the Soviet Union’s use of design contextualized this process.

A few weeks ago I spent my spring break in Belgium, and my love for design would not prevent me from spending a solid two hours in Brussels’ Design Museum “ADAM”. The museum was split into to two main exhibits, a section on Soviet Graphic Design, and another on plastic design. If a trip to Belgium is in your travel plans, I highly recommend this Museum.

I learned that the soviet union endorsed and commissioned many design projects that promoted aesthetic and ideological characteristics desired by the sate. This manifested itself in a variety of commercial and aesthetic products ranging from sports to packaging to posters to music and event design. All of which were, at their core, forms of creating visual systems. 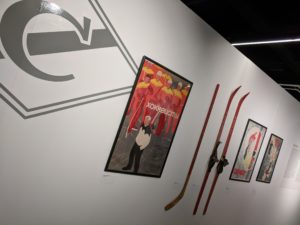 This first section above is on sports equipment design. Physical fitness was considered an important characteristic of a good communist, which resulted in a close attention to promoting sport and fitness gear. Here we see the famed communist red used as promotional material for skiing and hockey and as a motif for the hockey stick. At first, I was completely unaware of the ability of design to permeate into fields such as sports. 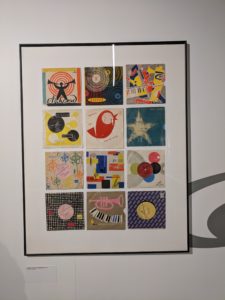 Next, we see an attention to packaging design. Above is one of 6 panels showcasing the liquor label designs. We learn that students were trained in label design, as it was considered a form of unifying the economy with the communist agenda. Design was a proxy and form of establishing a sense of economic stability. Designers used it as an outlet for creativity and expressed the quality of products to consumers. 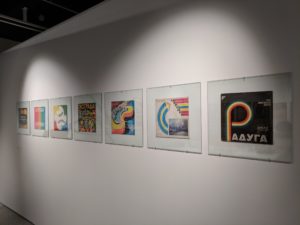 This care for design extended to music, and album covers. Even guitars. Interestingly, I found that although political appropriateness was central to design in the Soviet Union, the act and profession was an outlet for an artist to experiment, which also promoted. 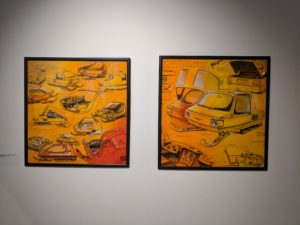 Many blueprints were sprawled across the walls of the museum, that showcased the importance of design in creating a technological ambition. Tractors, trains, and snowmobiles were all conceptualized and visualized as a form of establishing the trajectory of the state and its investments. The designs show us that the Soviet Union has the ability to advance technology.

At first glance, I would not consider this a form of indoctrination, but upon considering the overwhelming bias towards the communist agenda and bombardment of this design, I can imagine how overwhelmed the Soviet population was with the ideals of the state. It would have been inescapable.