Burned into my mind, in the most sarcastic Italian voice, is the image of Goffreddo (one of my design professors) pointing at a board with a drawing of a banana yelling “BA-NA-NA”. This image, although amazing stand-up comedy material, reflects an important idea; that design is both a way of making people’s lives easier and a way of engaging people’s minds.

Many of the designs we see look cool and funky, and according to the client, are functional. However, the essence of creativity is lacking. The weird associations, hard-to-read text, imagery, and manipulation are components of a design (at least in posters and some 2D media). Catching someone’s eye is much larger than the pretty visuals; it is more complex than the final design, and is, instead of a result of actively considering the relationship between aesthetics and function from the point of conceptualization.

This lazy form of design (leaning towards funky visuals over a solid concept) is a struggle that I still battle. Take this example, a header that I was asked to design for The Gazelle in my freshman fall. It was quickly made, with little thought placed in the design, I resulted to what I thought was an interesting color palette, which may very well be the case, but could be used better. 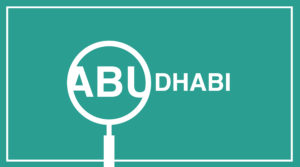 The article, which was meant to describe the events of the scavenger hunt, was not only underrepresented but interpreted fairly literally.

I think that this tendency is slowly improving, but is a habit that has to be actively worked out of my system. One opportunity to do so was provided to me in the form of the Academic Enrichment Programme, one for Emirati students to take courses at NYUAD as a precursor for joining our community. The programme runs through three courses taken here in Abu Dhabi, Florence and in Berlin. I was approached to help design the notebook that would be used for the three courses and decided to start with the dividers that separate the notebook into three sections. The course titles are named “Identity”, “Quill and Chisel”, and “Journeys”, which I wanted to translate to Arabic calligraphy. After speaking to Goffredo, I learned that the dividers should remain simple, as a notebook should remain unobtrusive and personalizable.

I warmed up some of my typography knowledge and started sketching. I landed on an idea that I liked, inspired by the works of Majid Al-Youssef. Al-Yousef has created a gorgeous series of designs and prints called “Calligraforms” which mean to emulate the calligraphic thuluth script. The letters are not necessarily meant to be read, rather appreciated for their beauty. 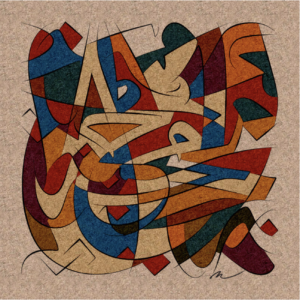 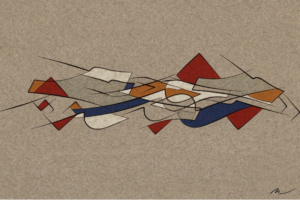 In an attempt to keep the design simple but also avoid redundancy I wanted to use the forms of the Arab script to create a decorative divider with the name of the course in fine type in English. The following are a few sketches, which at the time I was interested in, but I decided that my skill in Arabic calligraphy and knowledge of the Arabic script were not at the necessary level to attempt calligraphic writing. 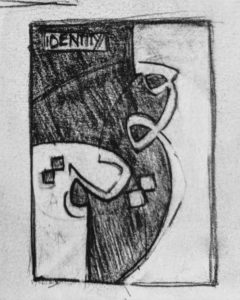 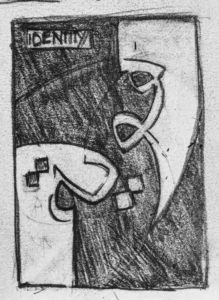 I instead decided to create a few simple san-serif glyphs in Arabic so as to avoid destroying any ancient customs of Arabic calligraphy. This is where I lost sight of the goal; to appreciate the beauty of the script. I began to develop a redundant design. 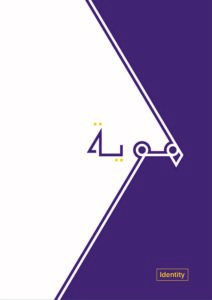 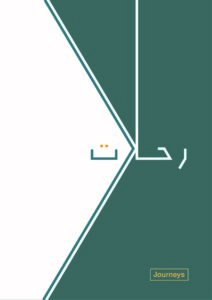 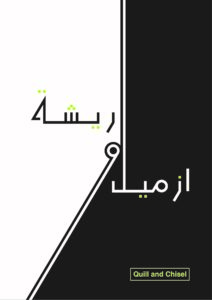 In my obsession with ensuring legibility and translation, I repeated the same information. This, in some contexts, could be useful, but here would serve no function, as courses are conducted in English, so students who read both English and Arabic would be provided the same information. The dividers were a paper version of screaming Goffredo. So, I decided to edit the design. 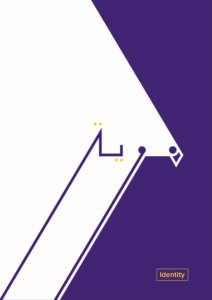 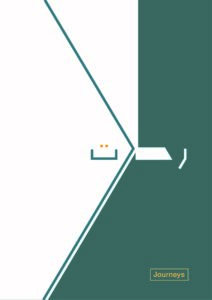 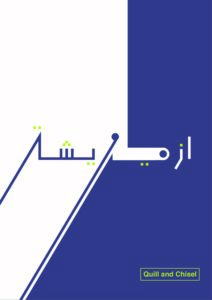 I am still continuing to work on this, but the direction that I am heading in now, feels, at least to me, more in line with actively engaging people’s minds. The text might not be legible, but at least it isn’t me pointing at the page and yelling at students to “WR-ITE HE-RE”.